The rose among the thorns

She is young, she is the only female and the whole industry is fairly new to her. Sounds challenging, doesn’t it? We have asked Etalvina Cossa, a young engineer from Mozambique, aged 23, to tell us more about her way into the renewable energy industry and how it is as a woman.

Growing up her mother wanted her to be a doctor, but she wanted a career in the renewable energy sector.

In University she studied a course in Renewable Energy Engineering and Management because that was the popular course to study at the time and when 80% of her classmates was specializing in oil resources, she decided to be brave and specialize in renewable energy. “I wanted to focus on something that will help sustain the environment and something I will be proud of in the future.” Another motivation that drives her is the social impact of renewable energy. Especially for Mozambique, where at present still only 16% of the population has access to electricity and the vast majority (70%) live in rural areas where only 5.7% use electricity for lighting, renewable energy can make a huge difference. “With Solar energy, I can put a smile on people’s faces after an installation I go to bed with the satisfaction that I brought happiness to other people’s lives with my work”.

In her words, she said, “my father was my biggest role model for me to choose the Renewable energy sector, as when I was young he would teach me games that would teach me a lot about the environment and the climate, of which I am now better than him at this work”. This is one exciting situation where the student has become the master. 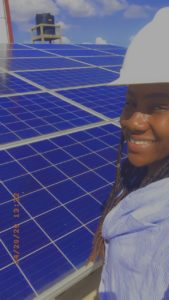 Etalvina joined Logos Industries in October 2019. Logos Industries was founded as an electrical distributor in Mozambique in 2003. By now, they developed into one of the biggest renewable energy companies in the continent with 13 branches in seven African countries. Their services include sales, installation, operation & maintenance of solar products and projects. Etalvina applied for the position with no experience but, that did not stop her from knocking on the door. On her application, she highlighted that she could bring value to the company and all she needs is a chance to prove that. Her great motivation in applying for this post was “Know your value and your worth” and she still follows that. And Logos Industries was willing to grant her the chance. Currently, in Logos Industries she has her hand in every pie, she does almost everything from Sales, Management, Training, Installations, and assists in Projects.

But as the solar industry is a male-dominated industry, especially in the field of installations and projects, we wanted to know more about the challenges that Etalvina faces as a woman. She told us a story that probably many other women in similar positions can relate to. A client walked in and asked for someone to assist him. When Etalvina said that she could help, he said

She then called her colleague who was on holiday at the time and explained to him the situation. Her colleague then spoke to the client and said “ whatever you need assistance with, the lady right in front of you will help you with as she has the answers to anything you can ask.”

The biggest thing she took from that situation was that her colleagues do not see her as just a woman but as a part of the team, a team player. Being a woman in a male-dominated industry is challenging but she can enjoy the work thanks to her colleagues who are the most amazing people to work with. They show her respect, support, and treat her just like any other person in the office, and they do not make things difficult. The problem is with the male clients as they are undermining her just because she is a woman. But Etalvina shakes it off quite well, she believes that people who undermine other people based on their gender are “mentally poor” because they do not see the potential the person has but all they see is the gender. 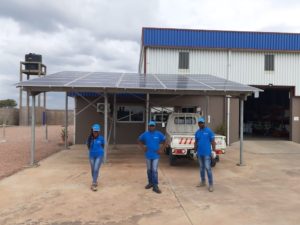 The advice she would give to all young women who are looking to join a male-dominated industry is to stop focusing on the problem and rather focus on improving yourself. She stresses that one should not compare oneself and says

“Finally knowing your value as a person is the best thing to do for yourself as that helps you to focus on your strength and start making an impact and do your best.”

In celebration of women’s month, we are conducting a campaign to highlight ground-breaking women in the Renewable energy Industry. Read our previous article from the series here: “ 5 steps into the solar industry”

Do you want to work in the renewable sector yourself?

Find out about our courses